The city of Xi’an, in north-central China, was an ancient capital of this vast land and home to one of China’s most important and influential emperors. China’s first emperor, Qin Shi Huang began his reign in 221 BC. He unified China and established a strong central government in the city of Xi’an. He also began the construction of the Great Wall of China, one of the most monumental engineering projects ever undertaken.

Toward the end of his reign, Qin authorized and began the construction of his tomb which was to be protected by an entire Terra Cotta Army, which was buried along with his tomb until it was rediscovered in 1974, quite by accident. Since then, excavations have uncovered an army of warriors, over 8,000 strong, with facial features that are different from man to man. The army includes horses and chariots, part of the cavalry, and several different types of soldiers, e.g. infantry, archers, etc. Without doubt, this was the most important archaeological find of the 20th century!

Here are some samples of what you will see when you visit the tomb. 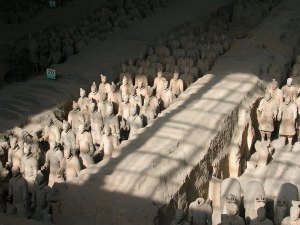 Other accessible sections include a headquarters with military officers

The city of Xi’an is also a significant destination. It still features its ancient walls, bell tower, and drum tower.

Inside the Xi'an Museum

Another interesting sight in Xi’an is the Small Wild Goose Pagoda, around which a local legend focuses. 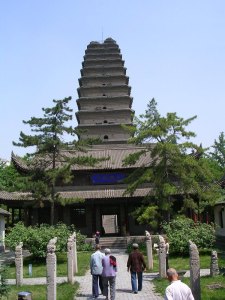 While in Xi’an we were treated to the Tang Dynasty Show, an evocative glimpse of the China of long ago with elaborate costumes and sets, accompanied by traditional Chinese music.

Retired Science Teacher Currently Athletic Director at Johnston High School Travel is my passion!
View all posts by gmazeman →
This entry was posted in Best of .... Bookmark the permalink.