Some military officers in the United States are prepared in service-specific academies, in lieu of a traditional college. These academies are well-respected higher education institutions, and they graduate some of the finest men and women this country can produce. The academies are located in various places in the US.

West Point, where Army officers are prepared, is located on the Hudson River, between New York City and Albany. It is a delightful location, and the grounds, as might be expected, are impeccable. 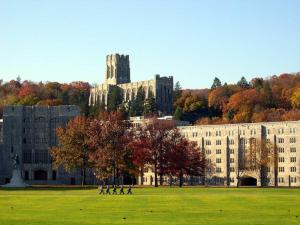 The US Naval Academy can be found in the delightful coastal city of Annapolis, Maryland. One of the significant attractions on post is the tomb of John Paul Jones, the country’s first naval hero.

The third of the major service academies is the Air Force Academy, located just north of Colorado Springs, Colorado, on a beautiful setting in the foothills of the Rocky Mountains. The main attraction on campus here is the unique chapel, designed by noted architect, Frank Lloyd Wright. The inside and outside of the chapel is spectacular.